McCue Investing in the Future with Apprenticeship Recruitment Drive 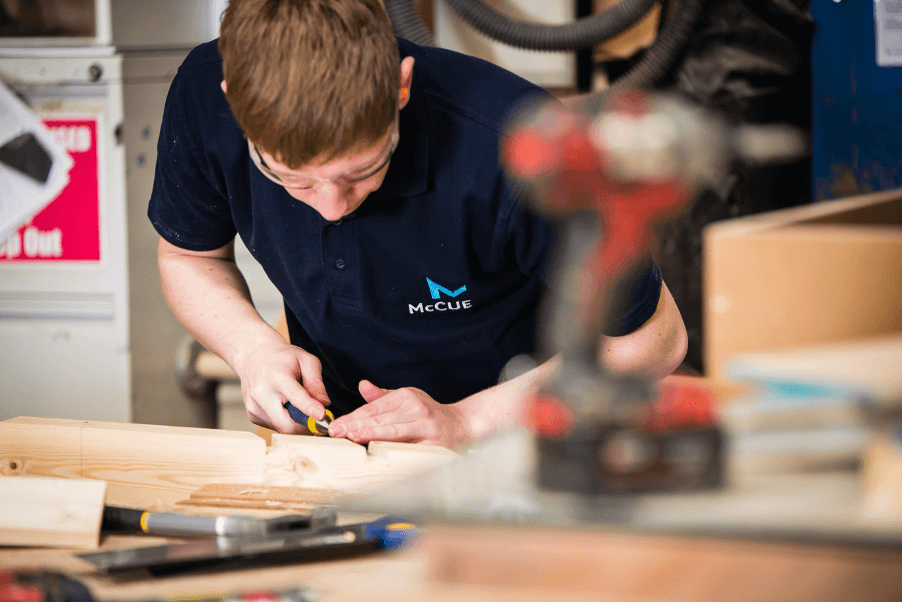 17 Sep McCue Investing in the Future with Apprenticeship Recruitment Drive

CARRICKFERGUS-based manufacturer, McCue, has partnered with two of Northern Ireland’s higher education facilities to recruit a number of apprentice joiners.

The company, which specialises in project management, fit-out and bespoke joinery, is taking on five apprentice joiners from Northern Regional College and Belfast Metropolitan College for the next academic year, in a move that will help the company retain its skillset in the future.

The apprenticeship programme will see the five apprentices undertake on-the-job training with the highly-skilled craftsmen at McCue, combined with occasional study that will culminate with a recognised qualification. They will learn how to create, craft and construct high quality joinery and intricate designs through time-aged techniques, which McCue has become renowned for.

Speaking about the apprenticeship programme, McCue’s Managing Director, Gary Purdy, who began his career as an apprentice at the company, said, “Since I joined McCue as an apprentice back in 1985, many things have changed however the core skills that our apprentices learn remain the same. It is fundamental for us as a business to develop the skills of our young people, who become an integral part of our workforce and can add real value.

“Throughout the apprenticeship programme, young people will gain the skills required for a successful joinery career; develop important relationships and have the opportunity to excel in a trade that there is a high demand for. It is also extremely important that they learn and enjoy what they do and this is something that we pride ourselves on achieving at McCue.

“My own personal experience as an apprentice with McCue has certainly shaped my career path, allowed to progress throughout the company and contributed to my current role. The apprenticeship programme is a great opportunity for young people to commence their careers, and we look forward to developing the young people and seeing their progression in the months and indeed, the years ahead.”

McCue operates from a 5,500m2 manufacturing facility and their bespoke joinery is highly regarded as some of the best in the sector. The company has completed many prestigious projects throughout the UK including The Berkeley and The Corinthia Hotels, Claridge’s, Four Seasons Hotel at Ten Trinity Square and 14 Hills.